Jerome Vinkler has been a personal injury trial attorney for 26 years, trying cases in Chicago and all throughout the state of Illinois. Mr. Vinkler focuses his practice on cases of medical negligence, wrongful death and catastrophic injury. His compassion and his preparation to learn the truth in each case and his knowledge of the insurance industry have led to a success rate of over 90% for his clients.

In 1981 Mr. Vinkler received a B.A. in Social Theory from the University of Illinois at Champaign, College of Sociology and in 1987 he received a Juris Doctor from DePaul University, College of Law, with high honors. Following his graduation he received his C.P.C.U. from the Insurance Institute of America as a Chartered Property and Casualty Underwriter.

In 1987 he was admitted to the Trial Bar of the U.S. District Court, Northern District of Illinois and the Illinois State Bar. He was also appointed by the court as an Ad Hoc Advisory Committee on Electronic filing in DuPage County

Creating a voice among his peers, Mr. Vinkler is asked to speak at seminars and lectures on trial practice. In December 2013 he spoke on trial technique for the Illinois Trial Lawyers Association Annual Medical Malpractice Seminar. He has spoken on “Supreme Court Rule 213 Changes” at the DuPage Association of County Women Attorneys, Wheaton, IL, and “Symposium on Supreme Court Rule 213 Changes” for the DuPage County Bar Association in Las Vegas, NV.

Since 1987, Jerome A. Vinkler has represented victims and family members who have been harmed and suffered from medical malpractice, products liability, automobile personal injury and wrongful death, construction negligence, aviation and railroad personal injury and wrongful death. He tries lawsuits in all counties in Illinois, with the majority of his work in Cook, Kane and DuPage Counties. 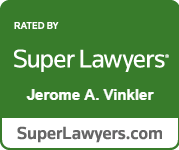